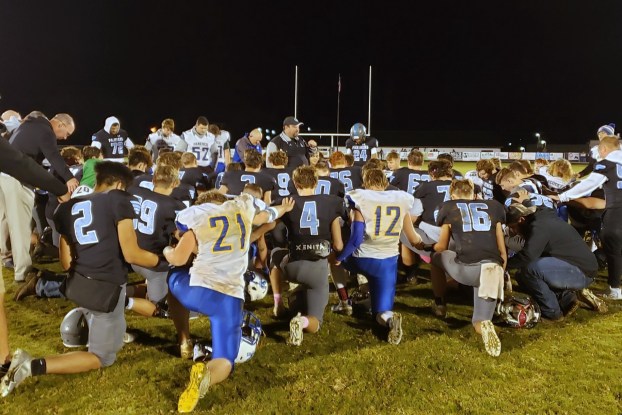 The two teams met after the game for a prayer.

Cumberland Gap hosted Hancock County for the second time this season in part because of COVID-19 canceling their out of state games.

During the first meeting the Panthers had a big win; however, this Panthers’ team came in with a third string quarterback and a few questions.

However, they had little trouble putting up points and led at the end of one quarter 20-0.

They started scoring through the air and then placed two scores on the board behind the rushing game of Logan Daniels and Kenny Vaughn.

At the 7:23 mark, Ranger Hensley scored on a Daniels pass and Ethan Thomas ran in the two point conversion to lead 28-0. The Panthers led at the half by the same score.

Ethan Thomas scored the first Panther points of the third quarter on a 10 yard rush but they failed on the conversion try. The score was now 34-0.

Shortly after, Kenny Vaughn rushed 32 yards for another Panther score but this time they converted and increased their lead to 42-0.

The Panthers were working the bench players in and the Indians scored their first points of the night, 42-6.

The game ended with the Panthers winning 42-6 and with both teams gathering on the field for a post game prayer.

The Panthers will now focus on getting their fourth straight win against Claiborne next Friday.