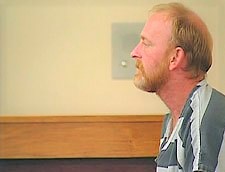 Wayne Burkhart is shown during his 2007 trial.

The plea agreement finalized last December may not be the end of the Wayne Burkhart shock collar case. Burkhart’s adopted daughter, who initially defended him, has come forward with allegations of ongoing sexual, physical and mental abuse she says she endured from the age of 12 to 19.

Angela Clark recently reached out to local law enforcement in Whitley County in Kentucky and Claiborne County, Tennessee with information that she hopes will reopen the case.

Burkhart was initially indicted in 2007 on a total 41 counts including 5 counts of aggravated child abuse, and 14 counts each of rape and incest. He was convicted and sentenced in Claiborne County Criminal Court to 70 years in prison. His sentence was later reduced to 50 years.

Burkhart, initially convicted in 2008, had his conviction set aside in 2016 by agreement with the state. The case effectively backtracked to ‘square one’ when Claiborne Criminal Court Judge Shayne Sexton overturned the verdict and remanded Burkhart back to jail under an initial $500,000 bond.

Burkhart pleaded guilty just three days shy of his new trial date to 3 counts each of rape, aggravated child abuse and incest. He was sentenced to 17 years in prison with credit for approximately 9 years of jail time already served.

Clark, who at 33 years of age, says she is just now beginning to deal with what she characterizes as complex post-traumatic stress disorder, depression and anxiety for the years of abuse she lived through at the hands of her father and step-mother, Rebecca Burkhart.

She says she knew nothing about the plea agreement until a couple of weeks ago when her therapist pulled the story from the Internet for her to read.

That, Clark says, is when she decided to speak up. She says she cannot move forward and continue to “keep their secrets.”

“All this started coming out in my therapy sessions. I just want people to know that I am truly sorry that I defended him. If someone will give me a second chance, I’m ready to right my wrong. And, I need people to know that Rebecca is not innocent,” said Clark, during a telephone interview.

She maintains that the couple routinely tortured her, with Wayne using the shock collar approximately 75 to 100 times during the course of those seven years, beginning at the age of 13.

The first time Wayne Burkhart raped her, Clark says her step-mother used a toilet brush on the 12 year old’s body while screaming “dirty whore” and other epithets.

“All I wanted was to have a Mom and be normal and have a normal life,” said Clark.

She claims her parents routinely forced her to watch pornographic movies and that she was trafficked for sexual favors to friends.

She says she was handed over for sex to one friend in repayment for an affair Wayne had with the friend’s 16 year old wife.

Clark recalled one instance of coercion when she was 15 years old. She claims that Wayne forced Clark to persuade her 14 year old sister to “keep playing.”

“Wayne had taken (the sister) for a ride. And, Wayne comes barging through the door. Here comes (the sister) in behind him and she says ‘Daddy, I don’t want to play anymore.’ And, Wayne grabbed a shotgun. He pushed me against the wall. He put it to my chin and he said ‘you get her to do it, or I’ll kill you.’

“And, with tears pouring out of my eyes and me shaking, I said ‘(sister’s name), please just do it. Please.’ And, (the sister) said ‘okay.’ And, I don’t think (she) will ever realize just how much guilt and pain I carry with me because of that day,” said Clark.

As the years progressed, Clark says Burkhart demanded more from the sisters, forcing sexual actions between the two of them while he watched.

His favorite punishment for any infraction became the shock collar, she said.

“Depending on how (angry) he was, you would get it on the calf of your leg or around your neck. And, really, you’d beg for it to go around the calf of your leg because it wasn’t as bad. Because, when he’d put it on your neck, that would make you hit the floor and just start shaking. You’d have no control over your body.

“And, he wouldn’t just hit it for a second. He would hold it,” said Clark.

She says she kept her silence because of her extreme terror.

“To this day, I fear him. I’d be terrified if I had to face him today.

“I didn’t trust nobody. He always told me that if I ever told anybody, nobody would believe it,” said Clark.

She says she feels as if her step-mother got off “scotch-free” with just a couple of light fines and the removal from the home of her three biological children by the Department of Human Services.

Clark claims that Rebecca Burkhart was a fully functioning partner in crime, detailing one of numerous instances of abuse still fresh in her mind.

“Becky’s favorite punishment for me was a metal spatula turned sideways. And, she would make me hold my hands out and she would sling it and pop my hands and break the skin of my hands open. And, when anybody would ask, I would have to tell them that it was from a dog leash. Because they trained dogs, that would be a logical excuse,” said Clark.

As of now, Clark is waiting to hear back from the Sheriff’s Offices in Claiborne and Whitley counties. Those responsible for determining whether to reopen the case are currently away.

The Claiborne Progress is following this story closely, and will have more information as it becomes available.