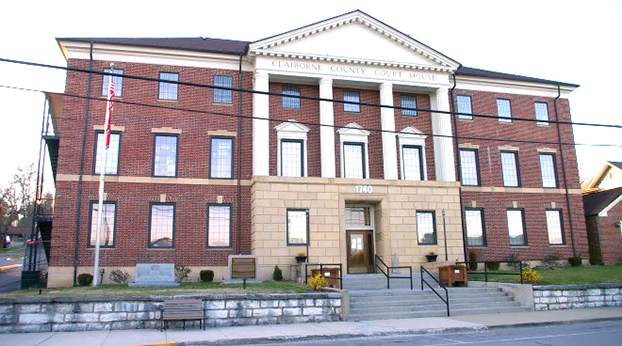 The Claiborne Commission is considering the purchase of the old Pump Springs Church Refuge property, located adjacent to the Claiborne Justice Center. Commissioner Whitt Shuford, who presented the resolution, ultimately pulled it until the board has the chance to tour the property and meet with officials from the Helen Ross McNabb Center.

If the county decides to follow through with the proposal, the Knoxville-based facility will likely lease the .32 acre property to establish a halfway house for drug and alcohol rehabilitation. The asking price is $175,000.

Commissioner Steve Mason proposed using a portion of the $189,000 in state-aid COVID19 funds instead to pay for the new sewer system to replace the obsolete one at Springdale School.

“I think it’s a good thing for them (the Helen Ross McNabb Center) to come here, no doubt. But, I don’t think the county needs to be in business buying a building for them,” said Mason.

County mayor Joe Brooks reminded the commissioners that, as of now, the sewer system is fully funded via an ARC grant. The county’s portion of the 10 percent matching grant will be $53,200.

Audience member Don Bryant asked why the county would need the McNabb Center to bring its rehab program to the county when Appalachian Promise is providing essentially the same services.

Brooks said the McNabb Center would be able to provide licensed psychiatrists who can prescribe medications and therapists for group sessions. The Center can also provide other outpatient services, he said.

The rehab facility would allow an alternative to sentencing for those who otherwise would be doing jail time on drug charges.

The Center has created a successful drug and alcohol rehab program in nearby Hamblen county.

The issue could be revisited as early as the September meeting of the commission.

In other action, county property owners will not see an increase in their taxes for another year. The commission unanimously adopted a resolution calling for a tax levy of $2.5777 per $100 in assessed property value – the same rate as was levied for the 2019-20 fiscal year.