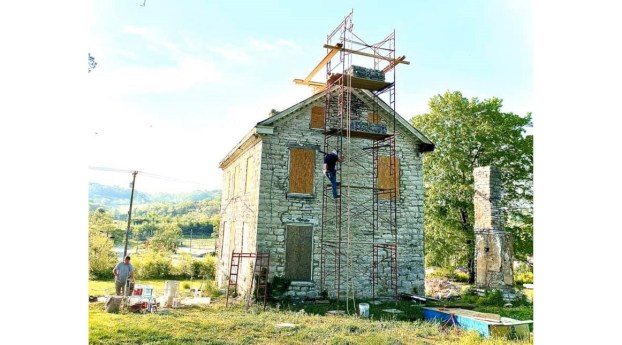 Despite a few twists and turns, the Graham-Kivett home looks likely to enjoy restoration to its original glory. The Claiborne Economic & Community Development (ECD) Foundation paid $21,000 for the historic structure on April 1 of 2017 during a delinquent property tax sale. Under purchasing guidelines, the Foundation sat on the deed for one year to allow any living relative the option to buy the home.

This did not occur, opening the path for preserving the building for use as a Welcome Center and Museum.

Work got underway as later additions of the home were torn down to allow its original Federal style structure to emerge.

Several failed grants later, the Foundation decided to hire Brewer Ingram Fuller Architects to create a preservation plan. The Architectural firm is well-known for restoring such historical structures as the Blount Mansion, Westwood and the Bijou Theatre.

The firm split the plan into three phases. The components of the first phase include reviewing the structure’s general conditions and utilities and restoring the foundation, roof , supports, windows, doors and openings. Restoration work on the stone masonry and site and landscape considerations will also be completed during the first phase of the project.

Phase 2 will involve renovations on the infrastructure while phase 3 will concentrate on restoring the interior of the building and reworking public access routes.

Phase 1 of the project will cost roughly $85,000, which the Foundation hopes to raise via grants and public donations.

In July of last year, the project was approved for a small grant in the amount of $4,260. Additional money has been raised through fundraisers like the Golf Tournament and Christmas in the County Seat.

The Claiborne ECD board approved to match, dollar for dollar, any donations made up to $50,000. In January, it was announced that the funding mark had been met, which means sufficient dollars are now ready to be used to allow the project to continue in earnest.

Built in the early 1800s by slave labor, the original structure housed four rooms. A cistern, used to collect rainwater, contains an interesting bit of history trivia. When the lid is raised, you can still see the outlines of slave handprints on the grouting.

Also located behind the home were the privy (outhouse) and slave quarters.

According to the late county historian Randy Bullen, it has been proven once for all that General Ulysses S. Grant never stayed at the home while visiting nearby Cumberland Gap – an event that would have raised the esteem of the home a notch or two higher within historical circles.

The idea was heavily researched, even down to reading Grant’s memoirs to see if any mention of the stay had been recorded by the staunch Unionist.

Since William Graham was a loyal secessionist, it does appear to uphold the conclusion that the two men never spent an evening conversing and trading stories in front of the Graham home fireplace.

The Graham-Kivett home was placed on the National Registry of Historic Places in 1975 – one of the first structures to enjoy that honor.

Recently, phase 1 began with the mortaring of the chimneys. The Claiborne Progress posted this on our Facebook page.

Brandon Keck commented on the post about his experiences while renting one of the upstairs bedrooms some 20 years ago.

“The whole house was packed with newspapers and books. Some parts of it you could tell no one had been into in years. It was always cold, damp and very eerie.

“Mr. Kivett would stop me when I came in at night and tell old stories for hours. I will never forget falling asleep under about five blankets because the old oil radiator heater couldn’t keep up,” said Keck, in his comment.

He spoke of hearing “the old man” downstairs having conversations with someone who was apparently an old army officer.

“They would talk till early in the morning. I am positive I heard the other voice but I never seemed to hear a vehicle come or go.

“I used to sit my soda cans and anything I needed kept cold in the window sills because it would keep it cold as a fridge,” Keck continued, in his comment.

Jane Beason, who also commented on the post, said she had been inside the house many times.

“The walls had beautiful colored paper and the staircase was amazing. The old player piano with the scrolls beside it and all the history in frames – his stories were wonderful,” said Beason, in her comment.

The Graham-Kivett house is located at the corner of Main Street and Kivett Drive, beside the Claiborne Progress Office in Tazewell.

To donate to the project, contact the Claiborne Economic Partnership at: www.claibornepartnership.com or call: 423-626-4149.

If you prefer, you may go to: www.gofundme.com and search ‘Restore the Graham-Kivett House.’