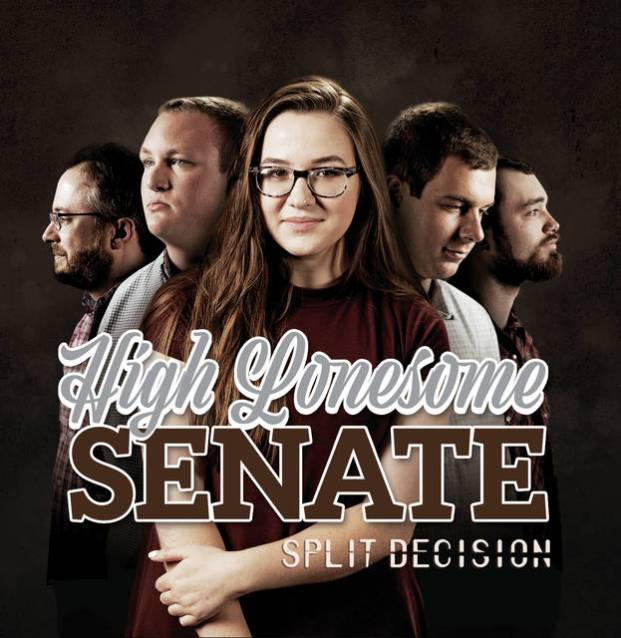 High Lonesome Senate, the Walters State bluegrass band, is celebrating the release of its second CD with a concert on Dec. 3, at 7 p.m., in the Judge William H. Inman Humanities Complex theatre on the Morristown Campus.

The concert is free, although donations will be accepted for the college’s Folklore Club. The CD – Split Decision – will be on sale for $15. The band’s first CD, “Cotton Candy Skies,” sold so well that a second printing was ordered.

“The band is constantly changing. Students usually attend Walters State for two years, so we’re always welcoming new members. This current lineup is a strong one,” said Chippy McLain, dean of humanities and advisor to the band.

The band includes McLain on guitar and vocals, Corey Kapnick on bass, Laree McMurray on fiddle and vocals, Riley Denton on banjo, dobro and vocals, and Ray Henard on mandolin and vocals.

For the new CD, the band used money it had raised to buy its own recording equipment and recorded the CD on campus with the help of John Phillips, a fan and friend of the band who volunteered as the recording’s engineer.

“Recording it in-house was a great learning opportunity for the students. We try to give them as many skills as possible. When they leave, we want each to be a confident performer regardless of major,” said McLain.

McLain wrote the title cut in a day.

“We didn’t really have a title track in mind. We thought it should be something that would connect to Senate in the name of the band. ‘Split Decision’ was thrown out right before we were ready to record. The students challenged me to write it in a day. I did and it surprised me more than the band,” said McLain.

The CD features three original songs and some covers of great standards like “Dreamer,” which was a hit for the country duo Joey and Rory.

McLain has been working with students in the band for about six years. The band grew out of the college’s Folklore Club.

“I want to celebrate my folk heritage and this area’s culture. I want to share it with students. This has become an important artistic outlet that connects me with my home,” said McLain.

During the past year, the band has played to large crowds at non-campus venues and had the opportunity to open for bluegrass legends Doyle Lawson and Quicksilver. The band attended and performed at the International Bluegrass Music Association’s World of Bluegrass at Raleigh in September.

For more information about the concerts or to purchase a CD, contact the college’s Division of Humanities at 423-585-6922.