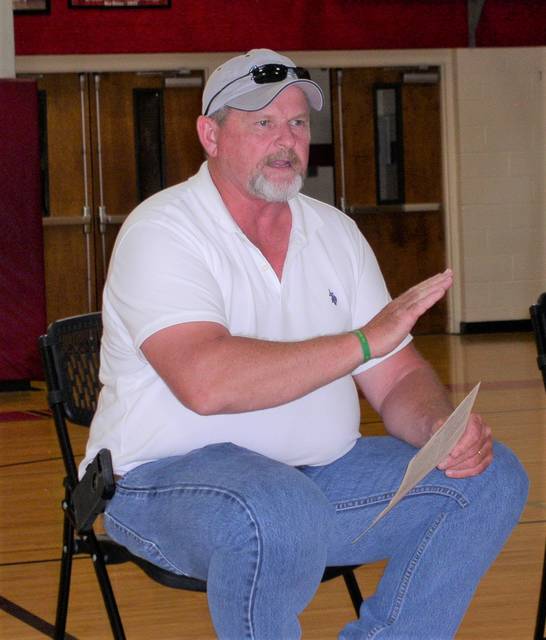 Claiborne Road Superintendent Ronnie Pittman talks to a group of District 2 residents about the shape of roads in their area during a Town Hall meeting.

A group of concerned District 2 residents faced off with Claiborne Road Superintendent Ronnie Pittman last week during the third installment of the Town Hall meetings.

Abnormal amounts of rainfall continue to cut away at the roads, ratcheting concern for already deteriorated roadways. The majority of those who attended the meeting seemed less than happy with the outcome.

Pittman says he is working methodically to get back into shape the 1,070 roads that wind throughout the county.

“People don’t understand what’s going on in the highway department. They just say ‘why hasn’t my road been fixed?’ When Bill Fultz (former road superintendent) and I came in here in 2012, we were under the burden of a $5 million note. On top of that, there’s been no change since 1987 in the highway transportation funding. We’re funded through the fuel tax,” said Pittman.

A significant portion of the problem, he said, is the increase in “miles per gallon” from vehicles that travel the roads today. These newer models net substantially less fuel tax dollars than in 1987. Adding to the situation is the steady increase in traffic that produces more wear and tear to the roads, he said.

The mandatory use of environmentally-friendly water-based striping paint and subpar materials now being used in tar and chip cause roads to wear quicker, forcing more dollars to be spent in redoing the same stretches of road.

“I encourage you that, if you want your roads fixed, don’t go to Kentucky or Virginia to buy your fuel. Buy your fuel in Tennessee,” said Pittman.

There were five bridges condemned when Pittman first joined the road department in 2012. State aid funds in the amount of $1 million were in place. However, the county was required to provide a 25 percent match for roads and a 20 percent match for bridges.

Pittman said the county did not have the money to match the funding, at that time.

Today, the road department is building its 13th bridge and is facing just one bridge pegged by the state as condemned. The $680,000 Clairfield bridge project is being funded through the Haslam Improvement Act.

Pittman said he has done away with the “old way” of politics.

“I make people mad all the time. They say ‘well, they (used to) come over here and (fix the roads) anytime we want.’ That ain’t happening. State law requires that you get all primary and secondary roads done first, before moving down to the low volume roads,” said Pittman.

He said secondary roads are determined by looking first at the travel volume, normally around schools, hospitals and churches.

A Cupp Road resident asked whether any help would be forthcoming for the six or seven homeowners who reside on his road.

“In three years we’ve not seen any gravel or grader. We’ve seen one patch truck on a road that should not have been patched. Mike Sharp (former road superintendent) tar and chipped that road for nine years. And, it hasn’t been touched since. The tar and chip is gone. You’re patching gravel. When you bring a load of patch down that road, you’re wasting your time and our money.

“We’ve got one little old lady down there that has taken her personal tractor, picked up rock and put in the mud holes. The school buses beat it to death. Yes, we don’t have many cars on that road. But, our cars are just as important as your car. I put four new tires on my truck two weeks ago. There’s one already busted because of the rock,” said the resident.

He said he had recently invested $480 to replace a portion of his daughter’s vehicle because of damages caused by the poor condition of the road.

The discussion quickly turned contentious between Pittman and the man, resulting in the resident walking out of the meeting.

A $5 million loan was taken out during the last administration. Of that revenue, some $1.4 million was used to fix the roads in District 2. Some at the meeting seemed to agree that it was hard to see where the money had gone.

“We just spent $300,000 on a grant to get the water erosion control on Duncan Chapel Road. Water is your enemy. It destroys asphalt. When we came in here, there was no money to open up ditches. We did preliminary work to open up all the ditches on the hard surface roads and move 150,000 yards of soil to move the water back into the ditch lines.”

A resident, who lives just off Chumley Road, said he and a neighbor had recently dug another ditch along Cingular Drive, which runs up a mountain overlooking his property.

“We’ve had so much rain that it’s washing out the whole road. We’ve lost about 25 feet of pavement from erosion. If we go another year, we’re going to lose another 25 feet. And, like you said, pavement is expensive. As a community we’re losing roads. We need to tar and chip it or something to stop that erosion from happening,” said the resident.

Pittman said he understood the situation.

“If I go down there and tar and chip yours, I’ve got to go back into everybody’s community and tar and chip theirs,” said Pittman, adding that he can only maintain the roads by grading until enough funds come in to do resurface jobs.

An Upton Lane resident said she had called for more gravel in February but has yet to see any.

After a brief discussion, it was determined that the road department would haul a load there.

Pittman encouraged the residents to call his office about problem areas. There have been times, he said, when a crew was working nearby and was able to address the problem while still in the vicinity.

Another audience member asked about the flooding situation on Mountain Road. Pittman said the Army Corps of Engineers had visited the county and taken a look at the roadway.

“They said it was probably a siltation problem on private property,” said Pittman.

As for FEMA, he said he is waiting to hear back from the agency. He said he did not “hold out much hope.”

A substantial amount of the money coming from the wheel tax goes toward snow plowing and bush hogging. It costs $100,000 per mile to apply a two-inch overlay to roadways. Grading and patching roads have become the norm while awaiting funds for major resurface jobs.

The highway department must maintain road equipment and pay for fuel and insurance with department funds. OSHA guidelines must also be met.

“After 40 years of political neglect and corruption, the tide is turned now – we’re now out of debt. This is the first year we get to start using the funds that was going to the note, to repair roads,” said Pittman.

He estimated a 2025 end-date to completely redo all county roads. The cycle will then begin its next go around, as roads continue to deteriorate through erosion and normal wear and tear.