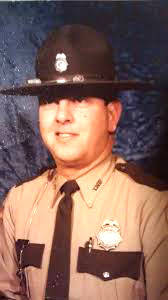 The Claiborne Commission adopted a resolution in March 2018 to erect signage honoring the late Tennessee trooper Douglas Wayne Tripp, who died in 1991 in the line of duty. Elected officials, law enforcement and others gathered at the Powell River Bridge on Sunday to celebrate the long-awaited sign dedicating the crossing as the Trooper Douglas W. Tripp Memorial Bridge.

What was to have been a simple traffic stop quickly morphed into a deadly affair when the trooper stopped John Henry Wallen for a speeding ticket.

Tripp was shot 10 times in the head, neck and shoulder areas with a .22 caliber rifle, while sitting in his cruiser at the Tazewell Muffler Shop. The murder occurred minutes before midnight on May 18, 1991. Tripp was pronounced dead soon after on May 19.

Wallen was initially convicted of first-degree murder and sentenced to life in prison. The appellate court reversed the conviction in 1995 and remanded the case to trial.

Appellate Court Judge Penny J. White stated in her opinion that there was insufficient evidence presented at trial to find for an element of deliberation. Also, White stated that the court committed reversible error by improperly admitting evidence of an uncharged crime.

Wallen was later convicted of second-degree murder. He was released in 2008.

Tripp, who served 20 years in law enforcement, was 42 years old at the time of death.