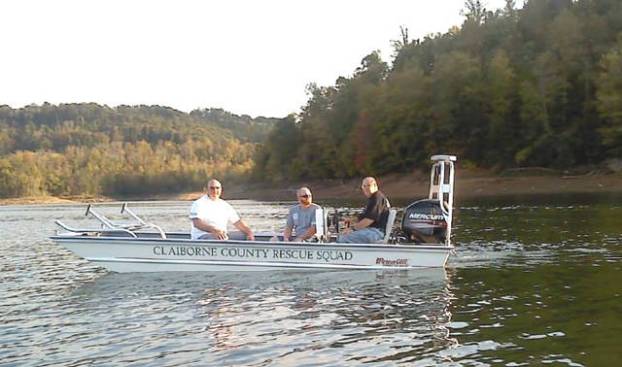 The Claiborne County Rescue Squad can be found on land and on water assisting in life-and-death matters.

Rescue is their business

The Claiborne County Rescue Squad quietly goes about its business, hanging in the background until an emergency ignites the volunteers into action. They are among those responding to highway crashes and water rescue and recovery missions. They are there following a farming accident or joining in with others in search of a lost or missing person.

The squad is there, lending a hand to those caught inside a collapsed structure or dealing with a myriad of disaster-related circumstances. They are there to assist during incidents involving downed or missing aircraft.

Members are called upon when expertise in technical rope rescue is needed. Or, when an individual is trapped inside a vehicle and must be extricated.

They are there when vital minutes are slipping away and it will be just a few moments longer before the first emergency medical responders can make it on scene.

The volunteers pick up the slack during accidents to ensure public safety while controlling traffic and crowds.

These sometimes unsung heroes are there, in the trenches, alongside other emergency agencies while individuals face possibly the worst minutes and hours of a lifetime.

For the last 18 years, the Claiborne County Rescue Squad has held its annual Bass Fishing Tournament. The event not only raises much-needed funds but also draws tourists and their dollars into the county.

The annual event drew 71 boats to the competition, held on April 6, and raised over $5,000 to help maintain the all volunteer-driven entity.

Roger Hager, executive director of Claiborne E-911, says that in recent years the rescue squad has seen a decline in its active membership. Currently, the roster holds some 17 names. However, there are less than 10 active volunteers.

Hager recently mentioned the tournament on his personal Facebook page.

“Talking about tourism money; as I drove home yesterday after the Rescue Bass Tournament, I saw bass boats at several gas stations, at KFC, at Pizza Inn, McDonalds, and Hardee’s. I started thinking ‘we had people from, Kentucky, Virginia, Knox, Union, Grainger, Campbell and Hawkins counties, and a lot of other places fish our Bass Tournament. They are spending lots of money supporting local businesses.‘

“Bass Tournaments help the local economy in more ways than you can imagine. So, next time you see a bass boat traveling our roads, be nice and remember that those bass boats are tourism money helping our economy,” reads the post.

The Rescue Squad holds just two fundraisers each year. The second one will occur within the next few weeks. The date has not yet been set. The annual Photo Drive allows supporters to schedule a photo shoot in exchange for a donation. The doner receives a free 8” x 10” and the ability to purchase additional copies directly from the photographer or studio.

The Rescue Squad uses the Bible verses from Luke 10:33-34 as their mission statement.

“And a certain Samaritan… going up to him bound up his wounds, pouring in oil and wine; and setting him upon his own beast, brought him to an inn and took care of him.”

For more information, you may contact Hager or call the Claiborne Rescue Squad at 423-626-3121.